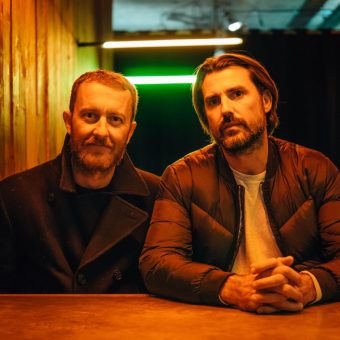 The Connor Brothers is the pseudonym for British artists James Golding and Mike Snelle. The duo came to prominence in 2012 and for several years maintained their anonymity by using a fictional biography. Their identities were revealed in 2014 in a major feature by Mick Brown in The Telegraph magazine, allowing them to undertake more ambitious projects. Best known for their Pulp Fiction series, the pair are also known for their activist work and their playful hoaxes. In 2014 they created a fictional museum -The Hanbury Collection, which fused truth and fiction in such a way as to render it impossible to work out which exhibits were real and which were not. This obsession with truth and fiction can be seen throughout their work, and is particularly relevant in the current climate of fake news, post-truth, and social media obsession.

The Connor Brothers have been amongst the most prominent artistic voices to comment on the refugee crisis. The duo worked for several years in The Jungle refugee camp in Calais building shelters and undertook an international billboard campaign highlighting the plight of displaced people – Refuchic. Closely associated with the Russian activist group Pussy Riot, The Connor Brothers produced their 2015 refugee-themed theatrical performance at Banksy’s Dismaland. More recently they have teamed up with Professor Green and the mental health charity CALM to raise funds and awareness about the UK’s epidemic of male depression and suicide.

The Connor Brothers have exhibited internationally from New York, Sydney and Dubai to London, Hong Kong and Berlin. Their work frequently appears at major auction houses where a record price was achieved in 2020. Works can also be found in major public and private collections including The Victoria and Albert Museum, The Penguin Collection and both the Omer Koc and Niarchos Collections.