‘Is there peace beneath the roar of the Forth Road Bridge?’ Scott Hutchison, Frightened Rabbit. ‘Floating on the Forth’, 2008. 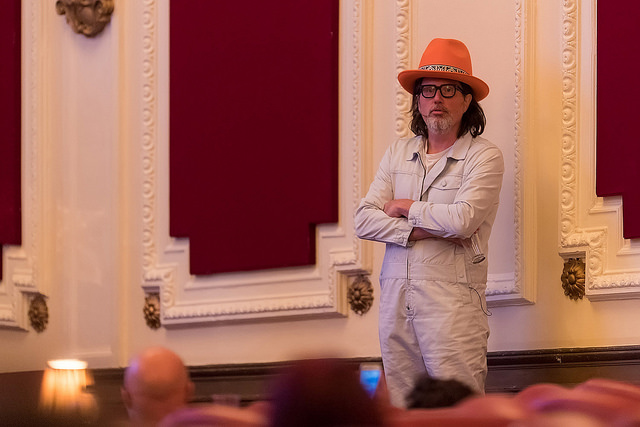 If technology is the new arms race and data is the new oil, I give you three data points. Or, as I call them, ‘holy shit’ numbers:

That’s how many men take their own lives in the UK.

76% of suicides are men. It’s the single biggest killer of men under 45.

As I write this piece, another musical hero of mine, Scott Hutchison, has enacted his own prophetic words (above) and has been found ‘Floating on the Forth’. I can only hope he has found some peace.  Scott didn’t trade in the modern concerns of technology or data. He was a man who felt deeply and wrestled hard with living. Upon his death, the networks lit up with fans that felt a visceral, emotional connection with him. And his loss. He was a beacon.

Sadly, suicide is a deeply rational option for men in extreme crisis. A rational way to resolve the bruising knot in the stomach, the hard edges of isolation, the flooding desire for escape… But it is a permanent solution to temporary problems. And it is a 21st-century health crisis, for which remedies surely don’t lay in technology or data. Male suicide has sustained a visceral punch for me since 2006 when I helped kick-start CALM, Campaign Against Living Miserably. I believe only culture can conquer it. We have to change the culture of masculinity.

Surely technology increasingly drives our culture? Yes, but technology can distract us from our humanity and reduce the issue of our mental health to a set of data points we struggle to compute. Two years ago, CALM sought to land the killer data points by intervening directly into the then dominant social space – Twitter. It seemed the quickest way to penetrate mass consciousness. Reach people where they are, through technology.

We suggested there were ‘Bigger Issues’ to discuss than the latest tittle-tattle. We coerced some of the Twitterati to hand us a momentary megaphone and deliver a thunderclap on World Mental Health Day. By 8.01am we had reached 30% of the UK population. Wahoo. In fairness, we were right to celebrate the reach of the campaign. And collect many, many social marketing awards. But I wondered at the time whether people’s steely human instinct for protection meant they could simply rationalise the data, by abstracting it and themselves out of the gravity of the issue; not really feel the full force of our intent and facts. Let’s be honest, data doesn’t always compute. Unless you have a direct relationship with the facts, it’s a bit short on experience.

By contrast, in April CALM confronted the public with 84 life-sized sculptures of hooded men standing defiantly across the London skyline above the ITV Studios. Our #Project84 installation appeared to be Anthony Gormley vs Spencer Tunick on speed.  The shock and awe of seeing so many figures high up above the Southbank was a thrill. But the wonder of passers-by was slowly punctured by a growing realization that this artful gathering represented the number of male suicides every single week. And that they, our men lost to suicide, had been (re)created by the bereaved families with sculptor Mark Jenkins. Only then did the digital tail start to wag. Technology lit up.  People shared their instinctive response to an unflinching experience and a rich back-story of loss.

For the first time in 11 years of campaigning, we were not invited into TV studios and press rooms to explain ourselves. CALM had no need to justify its provocation. We dubbed #Project84 a velvet fist – a seemingly gentle hand delivering a bloodied nose.  Our fisticuffs reached 171 million people in 6 days. 2.1bn punches were landed. Alongside our partner ITV, it was CALM’s ‘Male Spring’. Everyone came out fighting. The cultural tremors continue to be felt, globally; notable in that they have manifested in a very human queue of corporate individuals, influencers, celebrities, policy-makers, families, men and women pledging to take charge of culture. To be the solution.

In truth, I have always been suspicious of technology as a silver bullet for what I consider human concerns, cultural concerns. So much technology celebrates a solution in search of a problem. It is so often based on cold mechanical data, not warm human empathy. Right now, like a junior rugby team, the mental health sector is chasing the technology ball to score a try. Crisis management through data analytics and machine learning. Of course, it has a place – many younger men than me would prefer to seek counsel from a Bot than face the shame of revealing their innermost to a human counterpart. But for me, that’s just triage or a digital band-aid. It is not a solution. Culture is the solution.

Equally, in our frothy online culture, it is too easy to trade comfort from ‘drive-by likings’ in an incidental, mutual dependency, imposed by the implicit contracts of the social space. It’s all social noise. Little cultural signal. Whereas, analogue moments of true experience elicit a more profound, unfettered human response. They generate friction – positive or negative. We pass less easily, less quickly. They drive through, longer and deeper. They have a lasting impact. They create a genuine signal in the noise; which is when culture actually evolves.

In the wake of Project 84, our challenge is to maintain CALM’s signal and continue to catalyse change within the prevailing culture of masculinity. I will not and cannot rely on data to gear a series of gleaming, technological solutions. Men like Scott Hutchison have to continue to resonate with their fellow humans. And find peace in this life.

Of course, I want and expect technology to be in my professional toolkit at CALM.  But unless cultural change starts in the analogue of experience, I fear technology is a bullet that might just increase the death toll, not reduce it.